Friends of Shelly Creek Park Versus the Archangel

A  green invader is threatening the ecology of Shelly Creek Park! 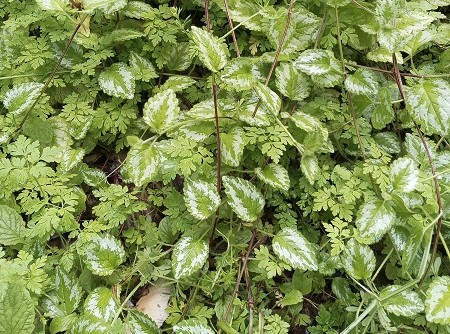 Lamium, also called Yellow Archangel, is taking over a large section of ground in the park and swallowing up Douglas Fir seedlings planted last year by City of Parksville employees, as well as Large-leaf Maple seedlings. Lamium is a common plant used in planters and flower beds and has been introduced by residents dumping garden waste in the park.

Lamium is an invasive species found in shaded to partially shaded habitat including wooded areas. It can easily out compete natural ground covers. If it were to make it to where Shelly Creek flows through the park, it could out-compete the natural riparian vegetation needed for streambank stability and shade for the resident Cutthroat Trout. 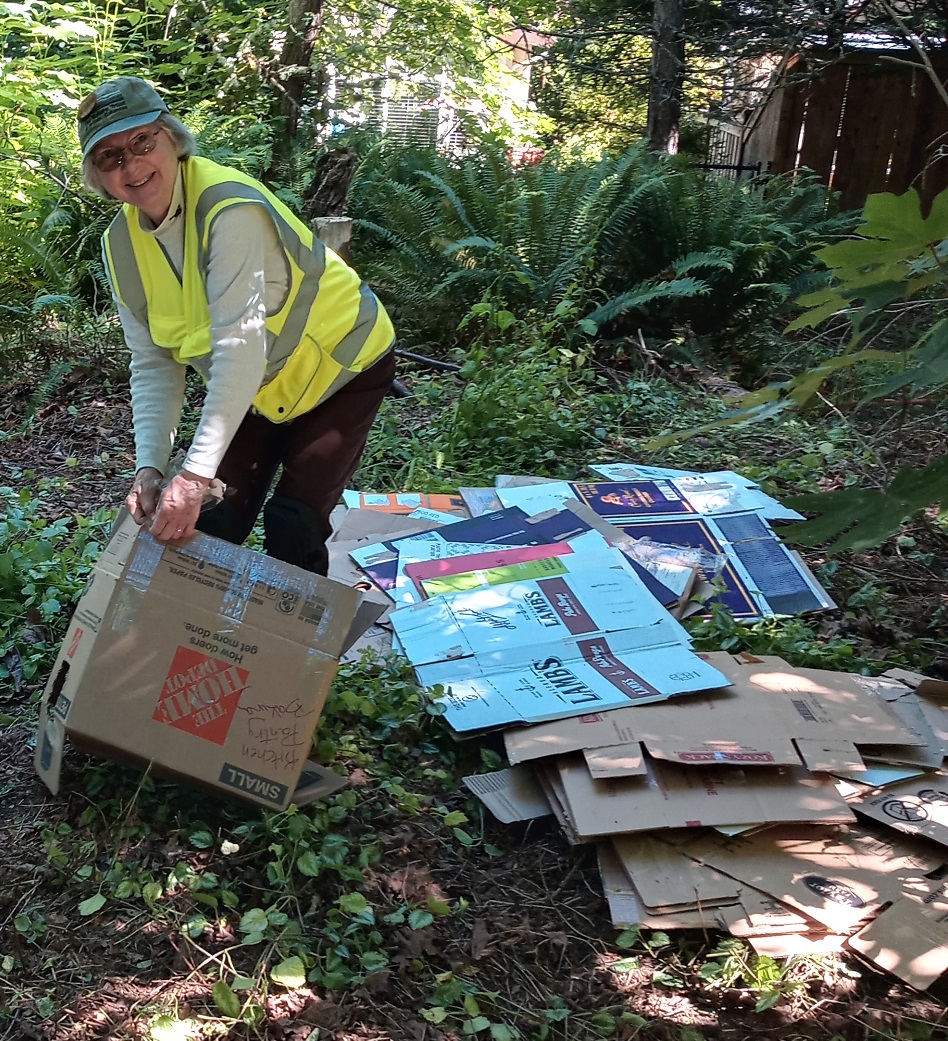 MVIHES volunteer and Arrowsmith Naturalist, Sue Wilson, lives beside the park and contacted Warren Payne, City Parks Supervisor, about the Lamium during the City of Parksville Open House down at the Community Beach. Warren already had the Lamium on his radar and was consulting with the Coastal Invasive Species Committee (Coastal ISC) to have it erradicated. If enough volunteers could be rounded up for pulling the Lamium, the use of an herbicide could be avoided. Sue succeeded in rounding up over 20 nearby residents and formed the Friends of Shelly Creek Park for a Lamium-pulling party. Fortunately, Lamium is easy to pull out and large open areas can be covered in cardboard to kill it and prevent it from spreading. The right-hand photo shows Sue breaking down donated cardboard boxes for covering some of the Lamium. She also baked dozens of delicious cookies for the volunteers. What an awesome lady! 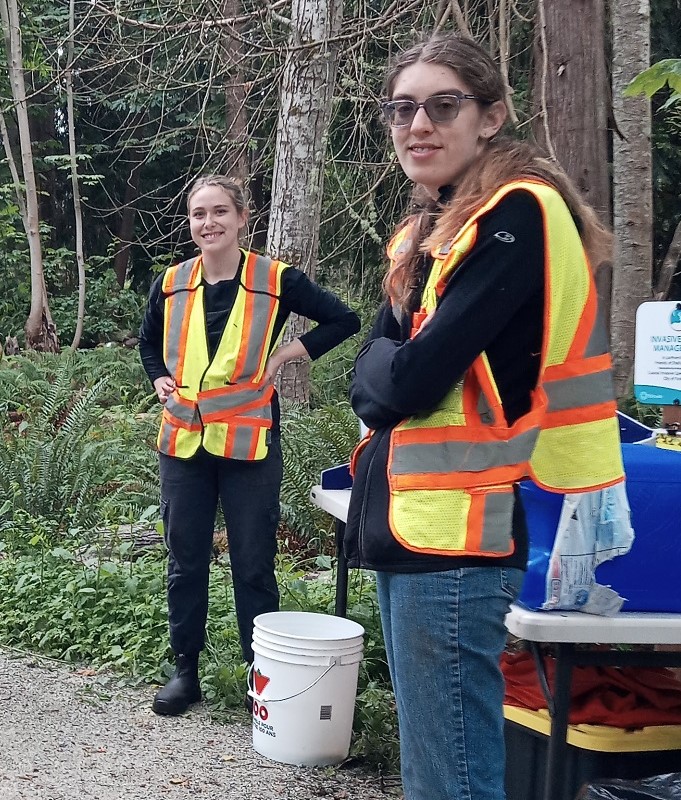 Between June 20 and 23rd, a total of 26 volunteers from Friends of Shelly Creek Park, Arrowsmith Naturalists, and MVIHES were led by Heidi Grant (Project Director) and Taylor Koel (Summer Environmental Technician) of Coastal ISC in removing approximately 90 bags of Lamium and laying down cardboard, for a total of 104 hours of volunteer labour. The first 60 bags were taken to the Waste Transfer station in a U-Haul rented by Heidi and Taylor, and the rest were taken by car.

The photos below show some volunteers in action. On the left is Helen Davidson of Arrowsmith Naturalists who's probably thinking "This ain't no Field of Dreams". In the middle is strata member Diana Matsuda, and to the right is MVIHES volunteer Austin Peterson. 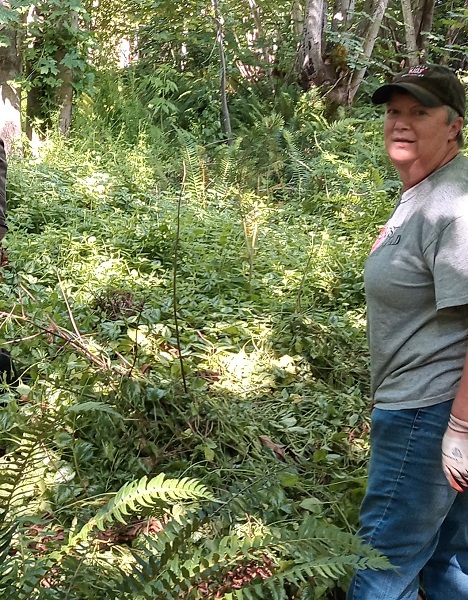 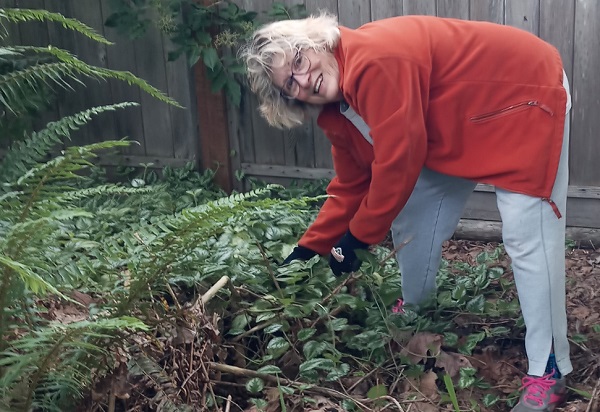 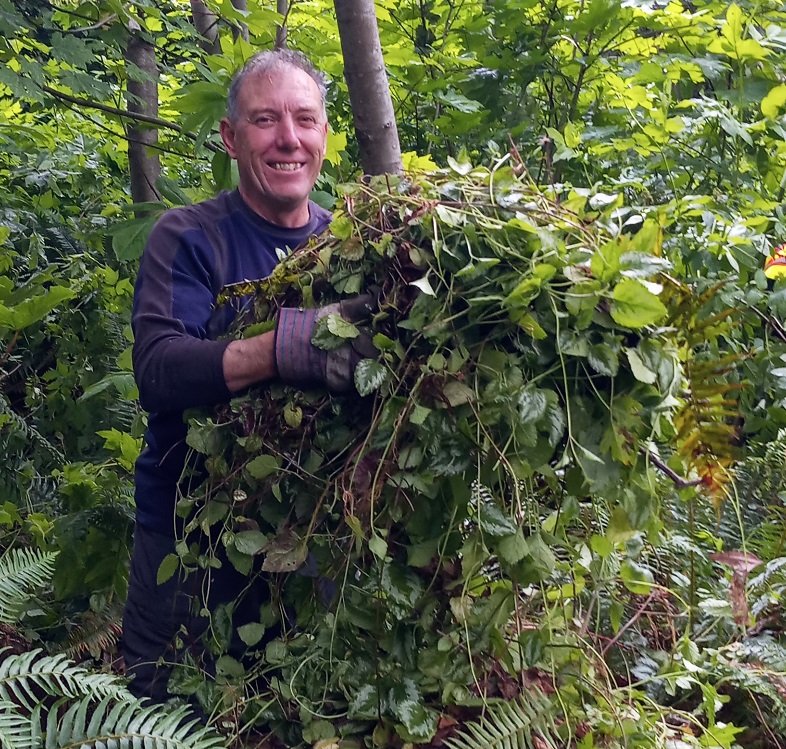 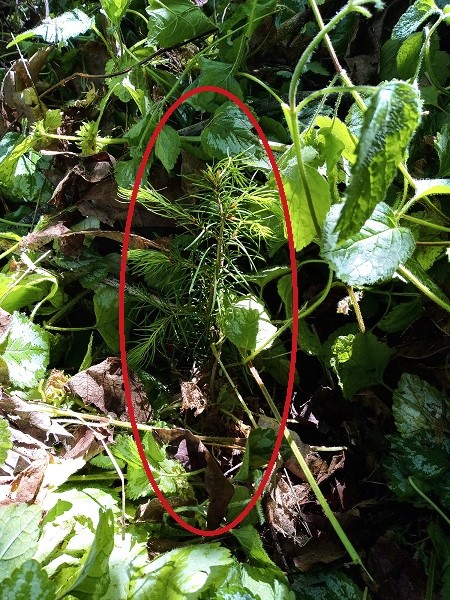 Here is one of many Douglas Fir seedlings that were buried by the Lamium. Poor little tyke. You can see how a natural wooded area like Shelly Creek Park could be degraded by a carpet of Lamium.

And now for some dramatic Before and After shots. 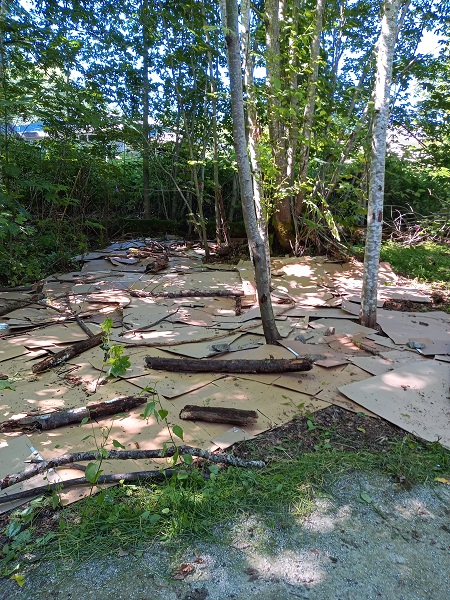 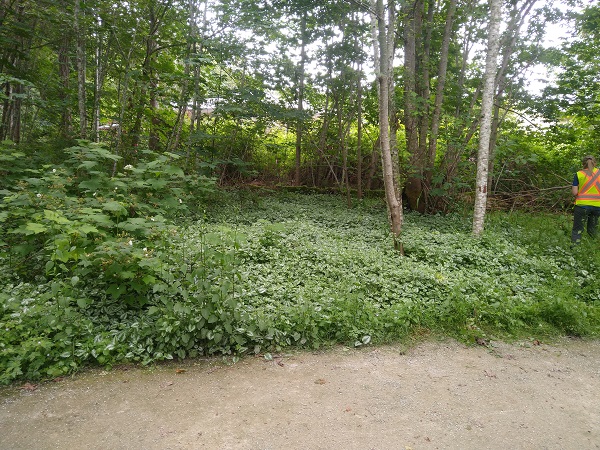 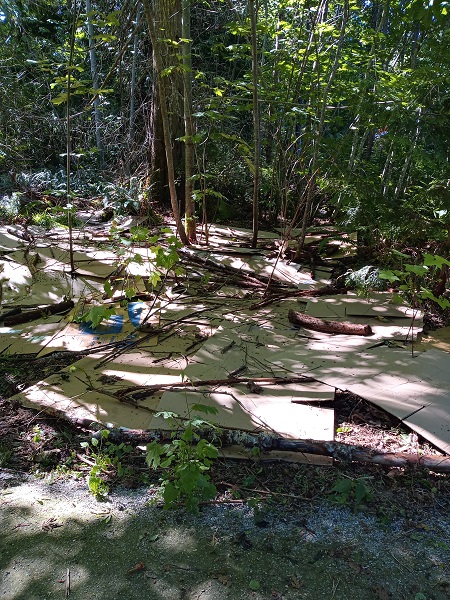 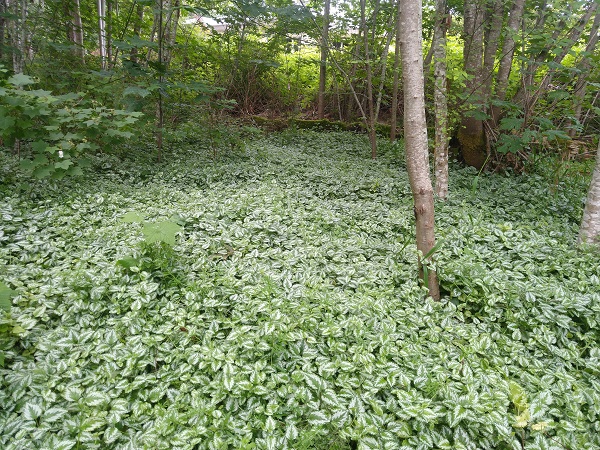 Yes, the cardboard is unsighty but it's a great reminder of why we shouldn't dump our garden waste into natural areas. Also, when removing invasive species, either from your yard or a natural area, they must be placed in garbage bags and taken to the landfill section of the Waste Transfer Station where they will be buried deep so they can't return. Never compost or include invasive species in garden waste (unless you are using a composting service where vegetation is heated to temperatures that kill seeds and rhizomes, eg. Community Composting).

Many thanks to Sue Wilson, Warren Payne, Heidi and Taylor, and all the volunteers that came out to fight the Archangel. Work continues in the park to remove more of this invader. If you would like to help, you can send an email to  This email address is being protected from spambots. You need JavaScript enabled to view it.