Volunteers on the Go - Part II

Welcome to the second in a series of "Volunteers on the Go". Our volunteers are proving very resilient by continuing to do MVIHES work while following the recommendations of BC's health officers in fighting COVID-19 (i.e. still no hugging and kissing allowed). Here are some more things we are doing.

Since 2011, MVIHES has been a participant in the Community Watershed Monitoring Network, a partnership between several community watershed stewardship groups and the Regional District of Nanaimo's Drinking Water and Watershed Protection program (DWWP). MVIHES collects water quality data in the Englishman River watershed that is used by the DWWP to guide land use planning that will ensure sustainability of water resources.

Elaine Lefbvre (in the photo to the left) is one of the MVIHES volunteers who has been monitoring water quality for six years now. Elaine is using a meter to measure the turbidity of the water in the Englishman River. Monitoring is conducted for five weeks in August/September during the driest time of the year when water flows are at their lowest, and five weeks in October/November when rainfall is running off the land and carrying sediment into the creeks and rivers.

Every year in July, two employees of the DWWP hold training sessions on the operation and maintenance of the meters before monitoring begins in August. This year the training was conducted differently because of Covid-19 but it got done, nonetheless. 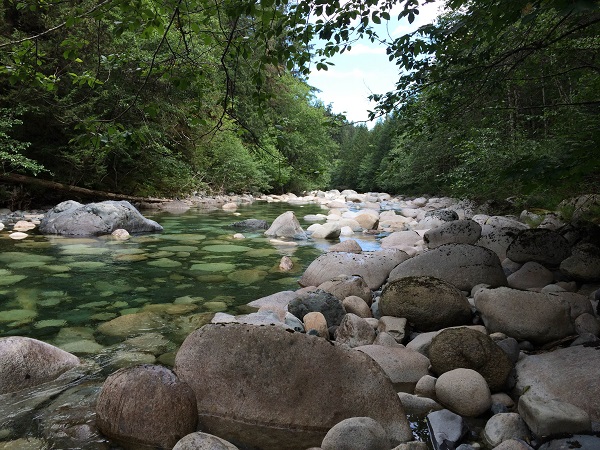 Monitoring sites are located between the Orange Bridge in Parksville and the upper Englishman River above the Englishman River Falls, and include Shelly, Morison and Centre Creeks and the South Englishman River. Some of the sites are on Mosiac Forest Management property so require some four wheeling to access (woohoo!) and a radio to communicate with logging trucks on the road. Elaine is in charge of the radio. And the scenery is gorgeous, as seen by the photo to the right.

What you may not know is that Elaine is a MVIHES board member and our invaluable editor. All the web articles and MailChimp messages are first reviewed by Elaine to make sure we mind our "P's" and "Q's", that our articles are clear and concise, and that we don't bore our readers with a lot of technical mumbo jumbo. A big thanks to Elaine. 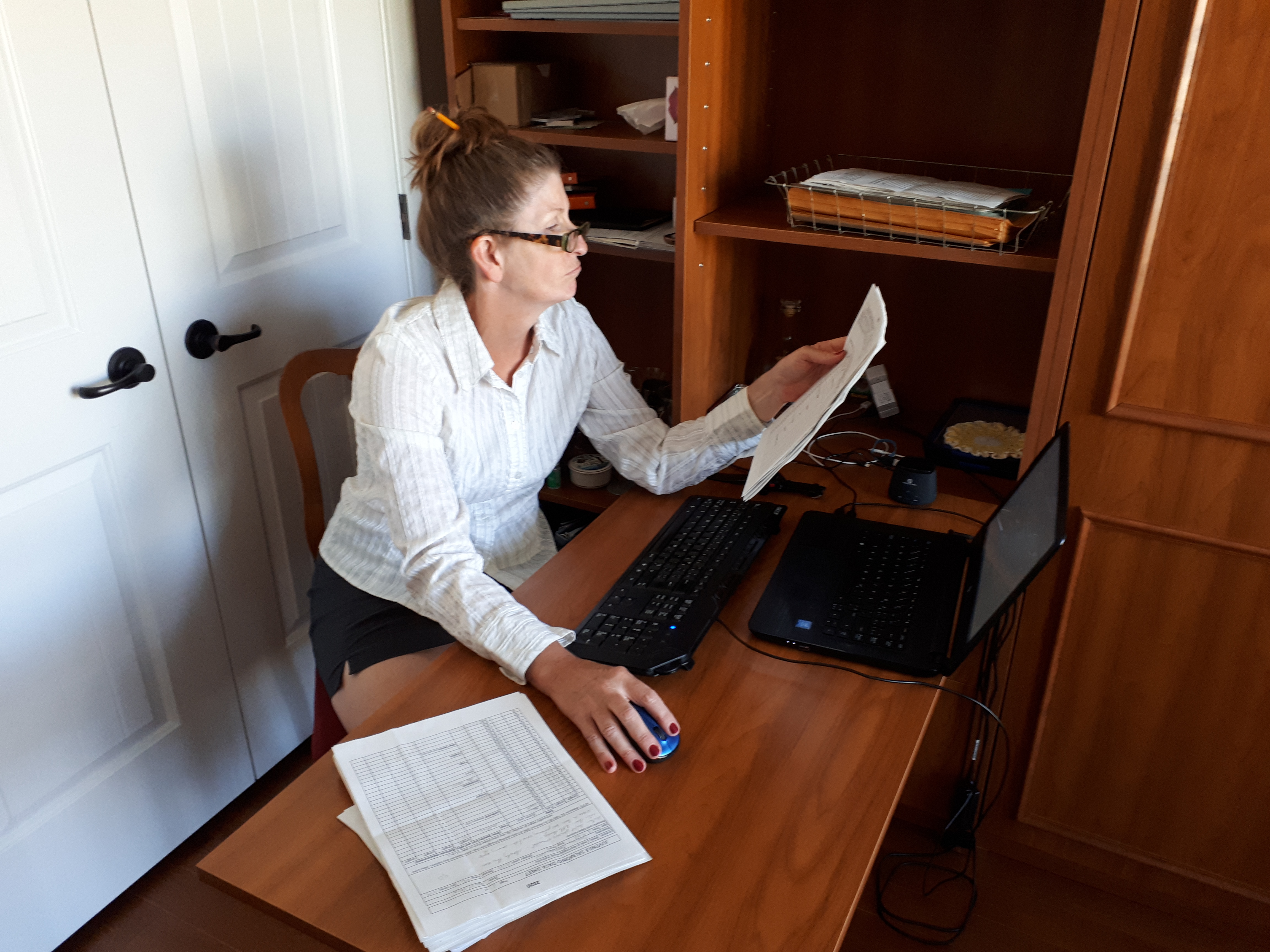 And a big thanks to Shelley Goertzen (right hand photo) who is our Secretary, keeping us all organized and taking the minutes of our Board Meetings, sending out the MailChimp messages, and the most exciting job of all, as seen by the expression on her face, entering all the data from the smolt trap and other fish surveys into a spreadsheet for Fisheries and Oceans (I think she's asleep). The rest of the time she is out doing field work like Stream Flow Monitoring. 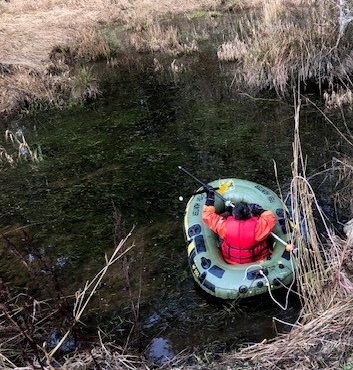 Just sit right back and you'll hear a tale, a tale of a fateful trip, that started on this marshy pond with sediment three feet thick. The boat was a floaty bathtub thingy. All that was missing was a rubber duck. One passenger set sail that day to measure up the muck............. Okay, that's enough.

Martindale Pond is a marshy area of Shelly Creek located on Martindale Road in Parksville. Every year, the pond provides overwintering habitat for thousands of Coho Salmon smolts and hundreds of Rainbow and Cutthroat Trout.  The fish move into the pond from the Englishman River to escape the turbulent winter flows, and migrate back into the river in the spring when the pond warms up and the water level drops. We know this because, every spring, we set up a smolt trap to count and identify the fish as they migrate out of the pond. The fish are released after they've  been counted to continue their migration.

Martindale Pond has been filling up with sediment for years from bank erosion upstream on Shelly Creek and from flooding of the Martindale neighbourhood by the Englishman River.  We are concerned the pond has filled to the point where there is not enough habitat for all the fish that need it. Last summer, our Biologist, Dave Clough, developed a plan for removing the sediment and disposing of it in an environmentally safe manner. This  includes the use of a dredge by a local contactor in late summer when there is usually no water flow through the marsh. Of course, all the critters that inhabit the pond in summer (turtles, frogs, salamanders) would have to be moved into a corner of the pond that will be fenced off from all the action, as required by regulations.

Last October we applied for a grant from the Pacific Salmon Foundation (PSF) to cover the cost of the contractor and traffic control personnel (since machinery will be working just off the road). In December, we learned that PSF accepted our proposal and is providing the $50,000 in funds we requested. Woohoo!!!

But this isn't a slam dunk. We still need to submit an application to the government for working in a stream. In addition to an Environmental Management Plan, the application requires a surveyed drawing of the pond perimeter and a cross-section of the sediment so we know how much sediment has to come out and from where. 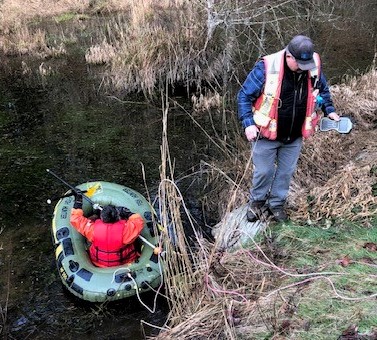 Koers Engineering in Parksville agreed to survey the pond and produce the drawing WITHOUT CHARGE. Kudos to Koers for their support of community stewardship! This is where the boat comes in.  After the pond perimeter was surveyed, a MVIHES volunteer who drew the shortest straw took a surveying pole with a prism on the end ($5000 to replace if the prism gets wet) out in the boat. The pole was set into the sediment in different locations in the pond so the surveyor could take his readings needed for the cross-section. No equipment was lost or damaged and we are just awaiting the drawing so we can complete our application.

We will provide updates as the project progresses.

The Sand Lance Have Landed!

No, not on the moon. 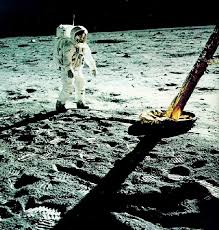 In San Pareil in Parksville. 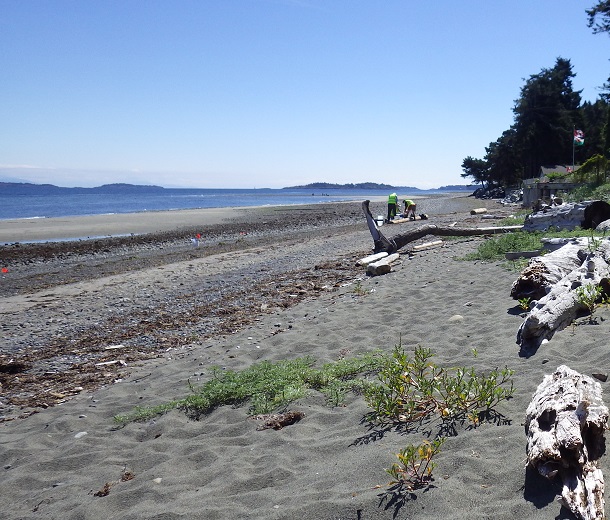 Last month we documented for the second year in a row that sand lance spawn on the beach at San Pareil in December. 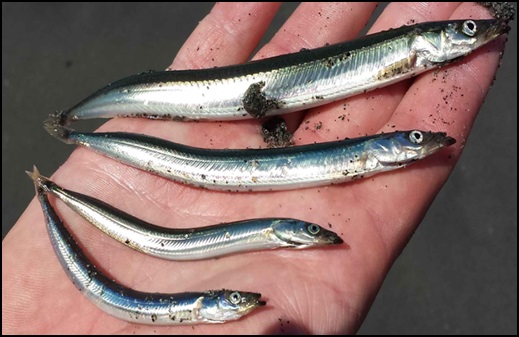 Forage fish such as sand lance are the cornerstone of marine food webs,  playing an important role in the diets of salmon, humpback whales, porpoise, sea lions, seals, and marine birds. Sand lance lay tiny eggs (1mm) on pebble and sand beaches just below the high-tide line. Activities like development or construction work on shorelines can have a detrimental effect on forage fish populations by destroying eggs and embryos. For that reason, the Department of Fisheries and Oceans (DFO) has "timing windows" which 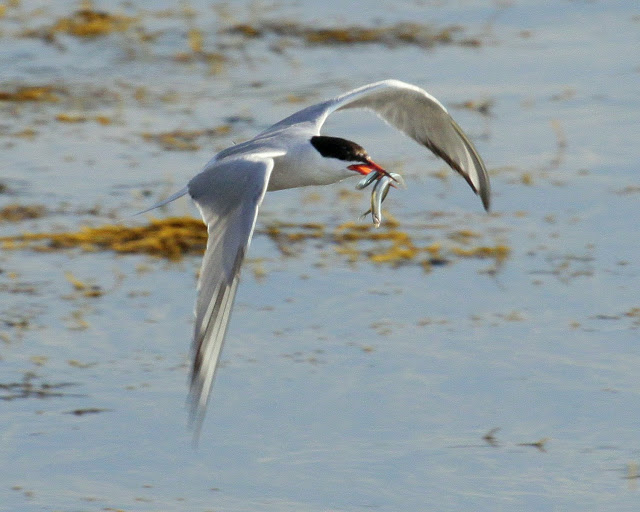 are periods when it is safe to conduct work on shorelines without damaging fish and fish habitat. Unfortunately, the winter timing window for fish is December 1 to February 15. So far, we have only found evidence of sand lance spawning on San Pareil beach in December, when it is assumed safe for shoreline disturbance.

So what evidence are we referring to? Well, in June 2018, volunteers were trained in identifying and mapping forage fish spawning sites under the instruction of Ramona de Graaf, Independent Researcher and Co-ordinator of the Shore Spawner's Alliance. This included collecting sand samples below the high-tide lines and  filtering and processing the sand through a series of sieves to collect the right sized sand grains to which eggs would attach. Too small to be seen with the naked eye, the processed sand is placed under a microscope and searched for eggs and embryos. 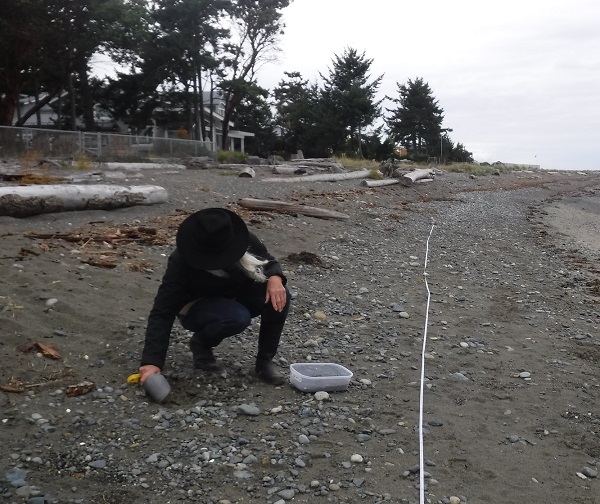 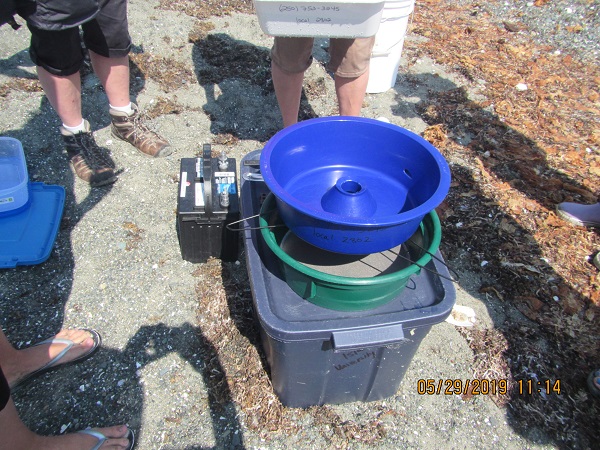 MABBRI has lent us an apparatus called a vortex, shown in the photo at right, which makes the separation of eggs from the sand easier following sieving.

On December 6, 2019 two of the sand samples we collected at San Pareil contained sand lance eggs. You can imagine how satisfying it was after all those months of sampling to finally find eggs. The longest egg hunt of our lives. Many thanks to MABRRI and VIU for the microscope work.

The importance of this work is that the beach in San Pareil can now be identified as one where protection of sand lance spawining activity is crucial. MVIHES endeavors to inform the residents of San Pareil of the importance of their beach for sand lance production. We will also urge DFO to change the winter timing window for shoreline work, at least for this area.

It will be interesting to see what our sampling in the 2020 will reveal. Stay tuned!