Volunteers on the Go

Despite the cold soggy spring we are having, our volunteers are as busy as ever and even managed to squeeze in some tree planting on a rare sunny day. Read on to see some of things we have been up to.

The Snaw-naw-as First Nation and MVIHES have formed a partnership in habitat restoration on Shelly Creek. Andrew McNaughton, a consultant for the Snaw-naw-as, approached MVIHES to see if there were projects we could partner on and indeed there are.

You may remember that last summer MVIHES conducted work on a 400 m stretch of Shelly Creek on the Shelly Farm. There were still a couple of tasks remaining with that project including shrub and tree planting along the edge of the creek, and installing woody debris for fish cover. Andrew consulted with our biologist, Dave Clough, on the native shrub and tree species that should be planted for providing stream bank stabilization and mega shade for Coho Salmon fry during the hot, dry summers. 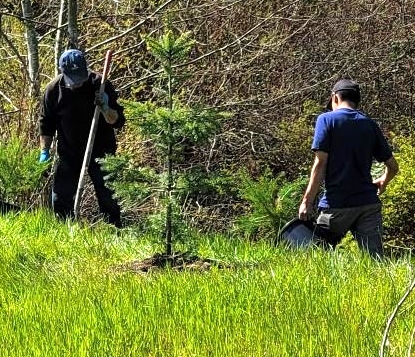 The Snaw-naw-as purchased 255 plants in 2 gallon, 5 gallon, and 7 gallon pots from Streamside Nursery. So these weren't the tiny seedling plugs planted by professional tree planters. The plants were much larger and robust to increase survival and provide shade to the creek quickly. And downright heavy (oh my aching back). In fact, the Snaw-naw-as had to rent a Budget moving truck to pick up the plants from the nursery. It took 2 trips. Species included Salmonberry, Pacific Nine-bark, Douglas Fir, Western Red Cedar, and Black Hawthorn.

The planting began on April 19 with six band members and twelve MVIHES volunteers (seen in photos below) and was finished up on April 20 by 5 band members. A job well-done by everyone. 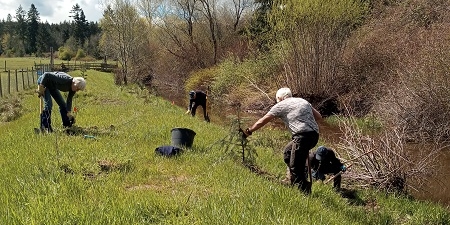 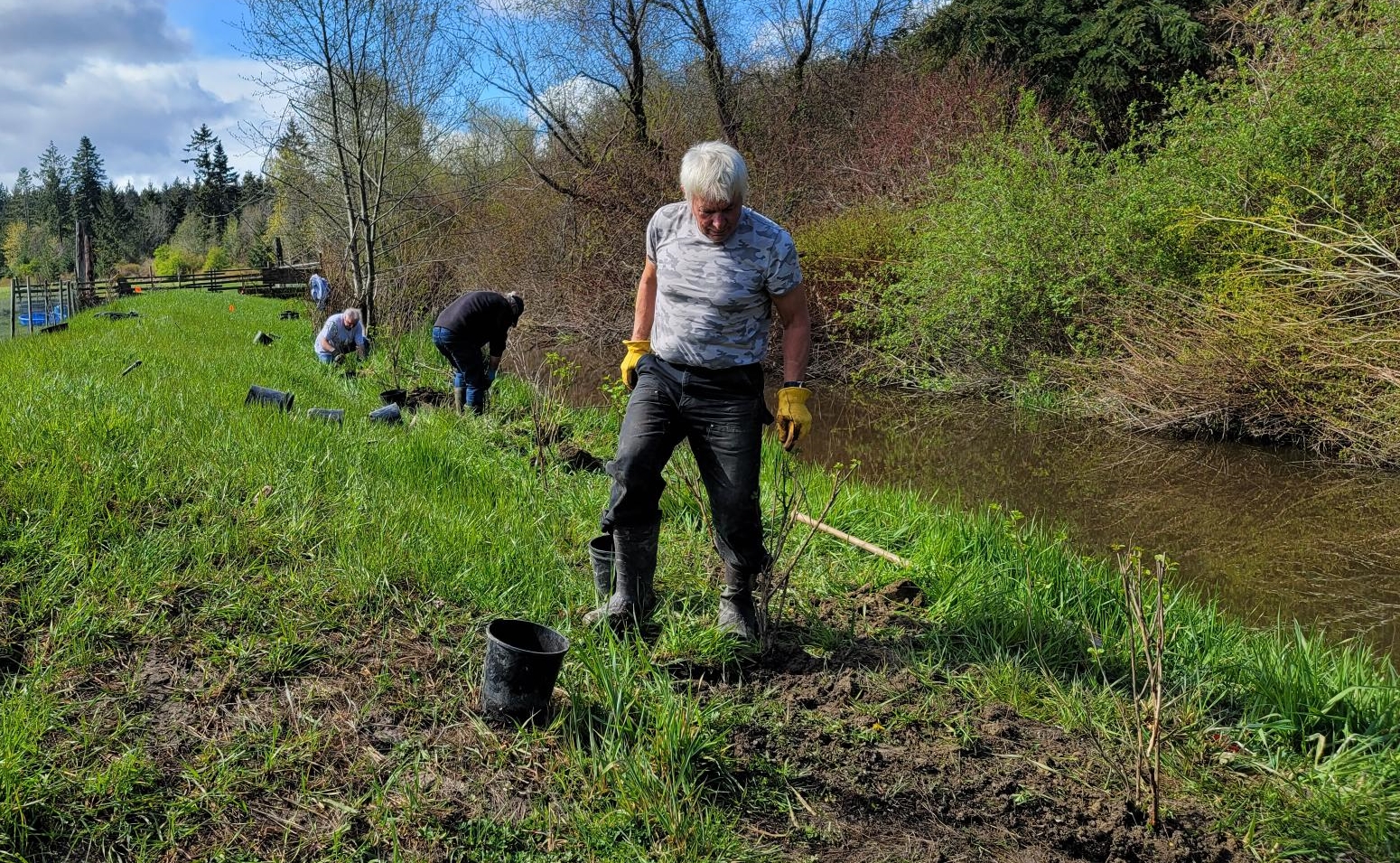 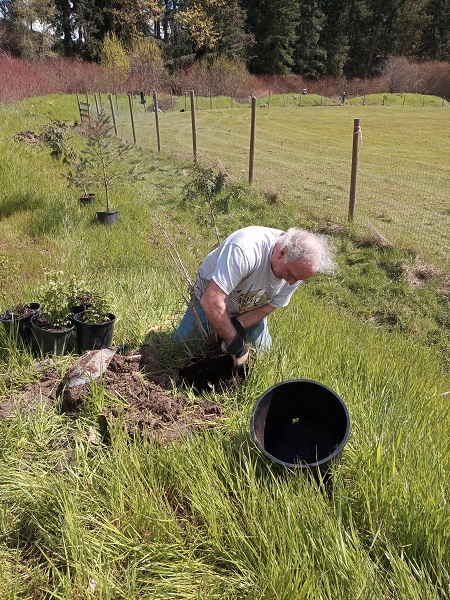 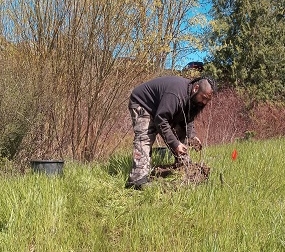 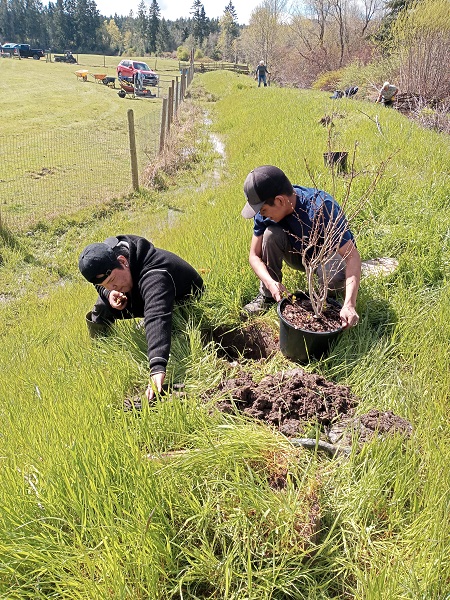 Since then, Andrew has sourced two truck loads of small tree stumps and logs from a logging operation and had them delivered to the Shelly Farm. This woody debris will be installed in the creek later this summer with our Snaw-naw-as partners to provide the salmon fry cover from predators. As they say in  "Casablanca", I think this is the beginning of a beautiful friendship.  Many thanks to:

And of course, Murray and Shelly Laplante, owners of Shelly Farm.

Our smolt trap was installed in March (see photos below) for our annual count of Coho Salmon smolts and juvenile trout as they migrate out of Martindale Pond on Shelly Creek into the Englishman River and out to the ocean. The project is headed up by MVIHES volunteers Shelley Goertzen and Carl Rathburn. The lifting of Covid restrictions has meant all of our volunteers can be involved like the good old days. Woohoo! 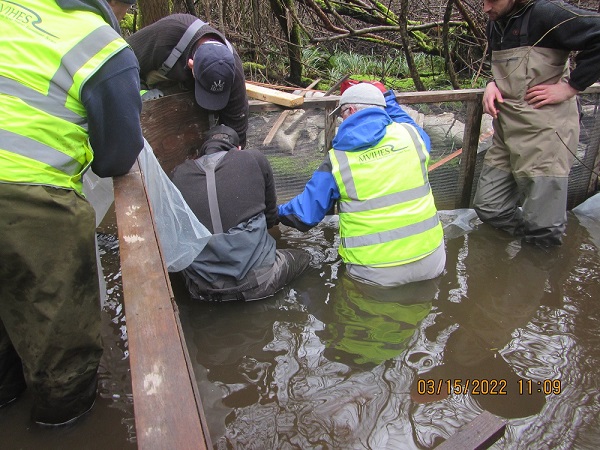 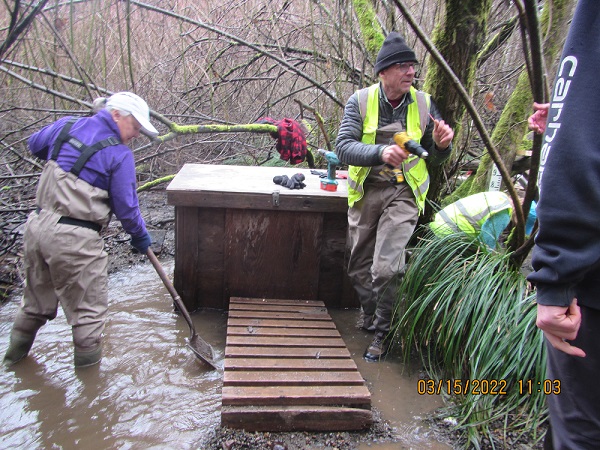 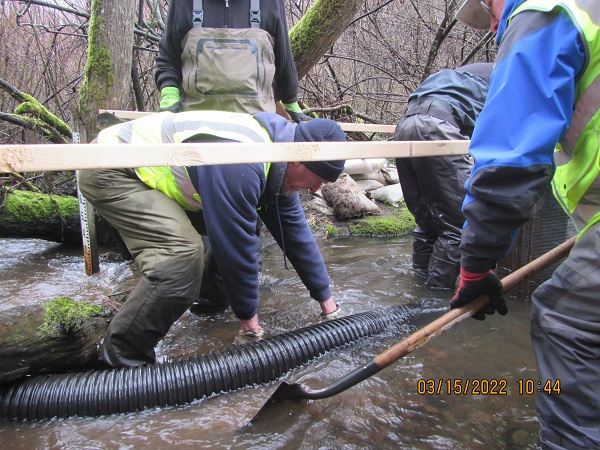 The migration was delayed by the unseasonably cold, wet spring. With lots of water and oxygen (due to cool water temperatures) why would the fish want to leave the relatively calm and safe waters of the creek for the ocean full of predators? Warm water temperatures and a drop in oxygen levels are what trigger the fish to begin their migration which finally started at the end of April. As of May 13, a total of 1764 Coho smolts and 54 Cutthroat and Rainbow Trout have been counted. The highest daily count so far is 337 Coho smolts. The actual number of fish is probably higher since high water levels have allowed some of the creek flow to bypass the smolt fence. The BC Conservation Foundation is once again PIT tagging the fish captured in the smolt trap for the Salish Sea Survival Bottlenecks Study.

An interesting observation this year is that many of the smolts are bigger and more silver in colour than in past years and some of the trout are just plain big, up to 30 cm (left-hand photo). Is this due to the restoration work conducted in Martindale Pond and upstream in Shelly Creek? Or is this being observed at the other smolt traps across the island? We'll have to ask Laura Terry, our Community Salmon Program Advisor. By the way, the trout in the photo was one of four sea-run Cutthroat Trout that probably came into the creek to snack on the smolts, rotten scoundrels. David Mackenzie from Nanaimo has been taking footage of fish in the smolt trap and has provided us with an awesome video which you can view here. 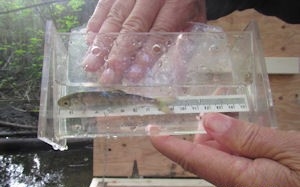 A Tale of One Urban Creek

During the month of August, MVIHES will be participating in the ETHOS  program at the McMillan Arts Centre (MAC) in Parksville,  part of an art installation project at the MAC titled  A Tale of One Urban Creek.  The objective of the program is to bring art and science together in celebration of our beloved Shelly Creek. While local artists (including MVIHES board member Chris Smith) are exhibiting their works of art themed around the creek, an interactive display of aquatic life and programs conserving aquatic ecosystems will be in the room across the hall. 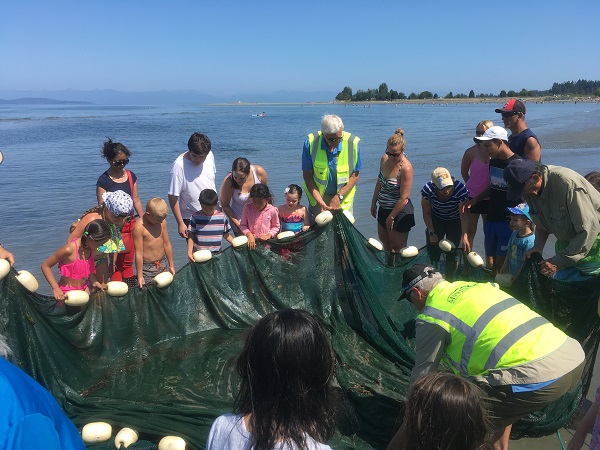 MVIHES will be running a Pond Critters aquarium thoughout August as part of the interactive display plus 2 or 3 beach seining events at the Community Beach (left-hand photo) to demonstrate the diversity of life in aquatic systems. The goal is to encourage people to become stewards of aquatic environments. 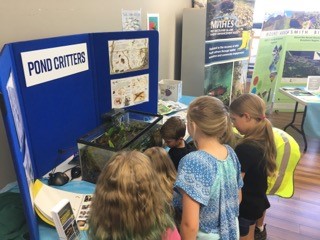 We are looking for volunteers to help visitors at the MAC find and ID the bugs in the Pond Critters aquarium (you will be given a tutorial so no worries if you're not a bug expert) for 2 hour shifts between 11 am and 3 pm, Tuesdays to Sundays throughout the month of August. If you can spare 2 hours two or three times a week, or even once a week in August, and/or you would like to join us for beach seining, contact Ross Peterson at This email address is being protected from spambots. You need JavaScript enabled to view it.